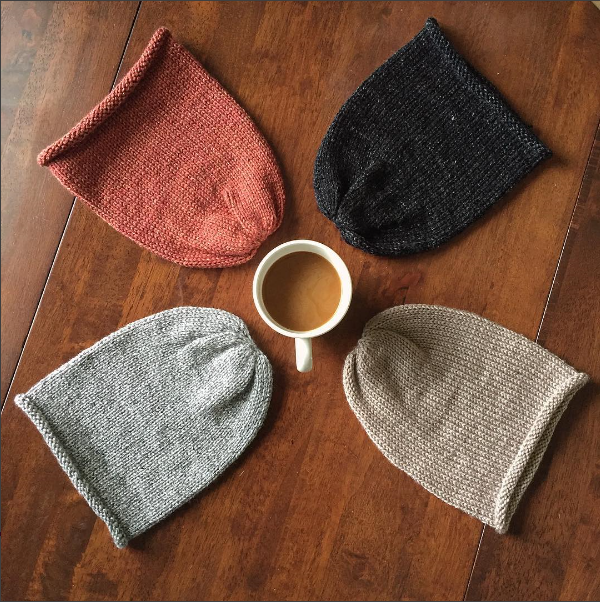 My name is Lindsay Porter and I am the proud owner, maker, and advocate behind Kinfolk Knits. I began this adventure in 2015 as the Facebook page, Crochet by Lindsay. My mother was the driving force who convinced me to sell handmade wares. As a talented crafter herself, Mom once maintained her own small business and went by the name Kinfolk. The name Kinfolk Knits serves as a tribute to her.

By definition, “kinfolk” means family, and this little business has everything to do with my family, my people, my tribe.

In December 2014 my 32 year old husband, Gerard, was diagnosed with Young-Onset Parkinson’s Disease.  While many think of Parkinson’s as an “old person’s disease,” we knew otherwise as Gerard’s aunt was diagnosed just 6 years prior to Gerard. The diagnosis left my little family feeling lost and powerless. Other than Michael J. Fox, we did not know nor had we heard of anyone as young as Gerard being diagnosed with this disease.

As we all began to learn about Parkinson’s and try to understand the present while staying optimistic about the future, I found myself wanting to do more and be more than just a sympathetic ear or strong shoulder for Gerard. We began going to Parkinson’s events, making friends with others impacted by the disease, and raising funds for the National Parkinson Foundation Moving Day Walk. Gerard found himself drawn to make a difference by participating in several research studies to help doctors learn more about the disease. I was so proud of him for stepping out of his comfort zone. Around this time, I knit and crocheted mostly as a hobby. It was a relaxing and creative outlet for me during our children’s nap time and at night. During the summer of 2016 I had an idea, a way that I could use my hobby to help raise awareness and funds to fight Parkinson’s. The Hats for Parkinson’s Project was born. The support from our friends, family, and complete strangers was overwhelming.

I want to continue to use my needles and hooks for good. The Hats for Parkinson’s Project lasts one month of the year where all proceeds from the hats are donated to the Michael J. Fox Foundation or the National Parkinson Foundation. Throughout the rest of the year when you make a purchase from Kinfolk Knits, a portion of the purchase price will also be donated to one of these two organizations. Your handmade knit will not only serve to keep you warm or decorate your home, but it will also help to make advancements in crucial research and provide education and comfort care to Parkinson’s patients and their caregivers.

Places to make a difference

Donate to help further  research and advancements in the field of medicine to find a cure for Parkinson’s Disease: The Michael J. Fox Foundation